The forces that were withdrawn from Gallipoli in December 1915 and January 1916 were sent to Egypt to rest, be re-equipped and retrain before most were sent to France. Four infantry divisions, one cavalry division and some independent infantry and cavalry brigades were retained in Egypt, and these were designated the Egyptian Expeditionary Force (EFF) on 10 March 1916.

Preparations had been going on for months to establish a major supply base at Kantara, on the Canal, and build a railway and a water pipeline from there into the Sinai Desert to supply a large British force, and in April 1916 the advance east began. The yeomanry cavalry of the 5th Mounted Brigade were sent out to seize the important wells around Qatia (or Katia) and Oghratina and develop them to supply the EEF. However, on 23 April 1916, a large Ottoman force, sent to attack the Suez Canal, came across the yeomanry and quickly surrounded them. The three regiments of yeomanry suffered terrible casualties, but stopped the bulk of the Ottoman forces attacking the Canal. Only one small Ottoman force made it near the Canal, and this was stopped by the Royal Scots Fusiliers at Dueidar. The Ottoman force retreated back towards Palestine, and the British pushed the 52nd (Lowland) Division and the Australian and New Zealand (A&NZ) Mounted Division out to seize the wells around Romani. Here, the infantry dug in while the cavalry began to aggressively patrol out into the desert 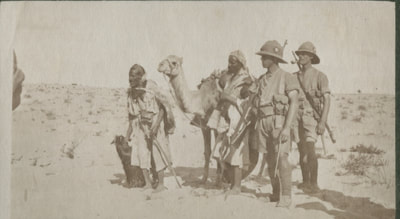 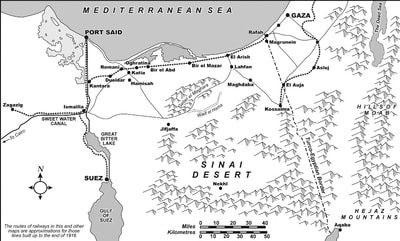 The Ottomans made another attempt to attack the Suez Canal a few months later with around 16,000 men, running into the 14,000 men of the British forces at Romani on the night of 3–4 August 1916. The 52nd (Lowland) Division held a line of redoubts running north to south, while to the south of them the A&NZ Mounted Division held a totally unfortified line. In the dark the Ottomans advanced straight into the piquet line held by the Australian Light Horse (ALH), who, vastly outnumbered, staged a brilliant fighting withdrawal through the night and into the next day. Several times they were nearly overwhelmed, but they stopped once their line was at right angles to the Lowlanders, running east to west.

This was all pre-planned, and as the Ottomans began attacking north to try and break through the Australians, units of British and New Zealand cavalry attacked their open, western flank. This was followed that evening by a counter-attack by the Scots and Australians. There was hard fighting, but slowly the Ottomans were pushed back. The next morning the Ottoman forces broke and began to retreat, and British infantry and the cavalry attempted to mount a pursuit. However, the infantry (from the 42nd Division) suffered badly in the heat and soon stopped, while the cavalry were already exhausted from the previous day’s fighting.  The British lost about 300 men killed and 900 wounded; the Ottomans at least 1,400 killed and 4,000 taken prisoner.

The Ottomans were able to conduct a steady retreat east towards Palestine. They held various oases along the way, some of which the British attacked successfully, but most were too heavily defended. British or Anzac cavalry would attack, but have to pull back in the face of heavy fire. While the cavalry went to water their horses and wait for infantry and artillery to come up, the Ottomans would pull back to the next oasis and prepare defences there. This pattern was repeated for several months.