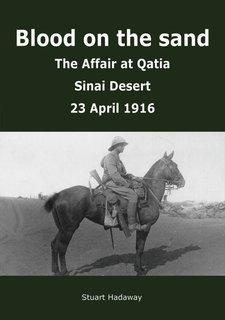 In April 1916, the Ottoman Army made another attempt to cut the Suez Canal.  This waterway was the link between Britain and her Far Eastern and Australian territories, and was strategically vital to maintaining the flow of men and raw materials to feed Britain’s war machine.

At Qatia (Katia, Katiya) and Oghratina, the Ottoman force, under Colonel Kress von Kressenstein, ran into outposts of the 5th Mounted Brigade.  Consisting of the Queen’s Own Worcestershire Hussars, the Royal Gloucestershire Hussars, and the Warwickshire Yeomanry, backed by Royal Engineers and other support troops, the brigade was spread out across a wide area and soon cut off and surrounded by massively superior numbers.
After a long and dogged defence under the burning sun, the garrison at Oghratina was wiped out and the one at Qatia nearly so.  Nearly half the brigade was lost.  Meanwhile, at Dueidar, an outpost of the 5th Battalion, Royal Scots Fusiliers, managed to hold out and even counter-attack.

Although British casualties were heavy, the Ottomans also received a bloody nose, and were unable to proceed with their attack.  Instead, they had to wait until reinforcements arrived in August, which would then face complete defeat at the Battle of Romani. 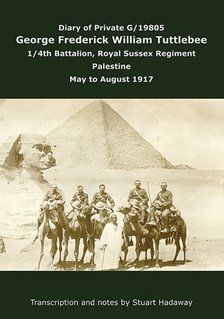 George Frederick William Tuttlebee served with the 1/4th Battalion, Royal Sussex Regiment, in southern Palestine in 1917.  Sent out as a replacement from the UK, the diary starts as Tuttlebee leaves Newhaven in May 1917 and then charts his journey across the English Channel, France and the Mediterranean, and into Egypt where he spends a couple of weeks acclimatising and sightseeing.

His diary then follows his travels to find his battalion in the Gaza-Beersheba line, covering two tours in the trenches. Tuttlebee describes the daily routine and work of establishing new posts, a lengthy trip to the field hospital for dental work, and his training and duties as a scout.

Tuttlebee's diary has been transcribed by Stuart Hadaway, with notes added on many of the people, places and issues mentioned as well historical background on the campaign. 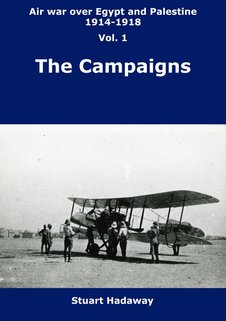 The war in the air over Egypt and Palestine was very different to that in France, developing at a slower pace and with challenges to be overcome that were nothing like those seen over the Western Front.  Smaller numbers were involved, but they developed in new and innovative ways.  The British air services grew from a handful of dilapidated BE2s in 1916 to a force that could destroy entire Ottoman armies by the end of 1918.  Both sides faced disease, shortages and an extremely hostile environment as well as the perils of the enemy.  This booklet provides an introduction to this unique and fascinating campaign. 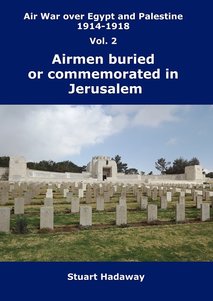 Air War over Egypt and Palestine 1914-1918
Volume 2: Airmen buried or commemorated in Jerusalem.

After a brief introduction, this booklet provides a biography of the following British or Australian airmen, buried or commemorated in Jerusalem, Israel:

Most of the airmen on the Jerusalem War Memorial are also listed on a memorial in Beersheba War Cemetery, and are included in the volume on Beersheba.

This volume also includes an Appendix:  British and Australian units serving in Egypt and Palestine, listing the locations and aircraft types used by each unit. 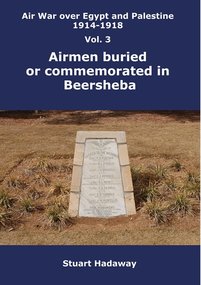 After a brief introduction, this booklet provides a biography of the following British or Australian airmen, buried or commemorated in Beersheba, Israel:

This volume also includes an Appendix; British and German aircraft used over Egypt and Palestine. This includes a short description of each aircraft type.

PLEASE NOTE: The price has been reduced due to a slight printing error on the contents page.
£5.99, or quote 'HI Website' for special price of £4.50  Prices include postage.
To order, please email us at:  ogbpublishing@gmail.com